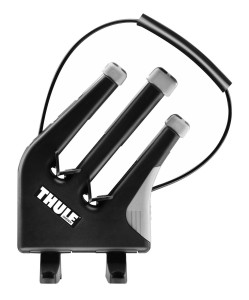 Normally, I don’t do many reviews on roof racks. As a truck owner, I’m plenty happy stashing my stuff in the back and getting to the first chair. But when the time came to actually justify it, I wanted to find a good solution that would hold plenty of snowboard. In particular, I was looking to hold 4 of them. I found the Thule Snowboard Rooftop Rack, and realized that while each pair holds 2 of them, I could fit 2 pairs on my roof, giving me room for four snowboards. Epic win.

The number one thing that drew me to this unit was that the rack adapts to not only Thule rack systems, but almost any factory rack out there. Given I didn’t have a thule rack system, my decision was almost made for me.

Installing and uninstalling these things is unbelievably easy. You only really need a tool to tighten down the piece that holds the rack to your pre-mounted rack on your truck.

In the real world, these things are awesome. At first I wondered why these were angled instead of straight up. But then I realized that the angle makes it easy to get the boards on and off the unit. Pointed straight up, and you’d need a friend that’s 7’5″ go grab the boards for you. Thule definitely put a little bit of thought into that before I did, so well done. At the same time, the design keeps your bindings plenty far from the roof of your car, so you’re never going to scratch whichever may be more important to you.

The key-lock cylinder really does hold the board down well. In fact, it’s actually a crucial part of the system, as the rack itself doesn’t have enough tension to hold your boards in place. If you’re looking for something that doesn’t have locks, I’d suggest looking elsewhere. But I don’t know too many folks out there that want their boards stolen, so I don’t even consider this little factoid an oversight. If there was any downfall, it’s that the locking cables have to be removed when you have no boards on the rack. It’s a little annoying, but not the worst.

Overall, I dig these racks. They’re convenient, they’re easy to install and use, and they make my truck look like it has deer antlers on it when the racks are empty. The Thule Snowboard Rack is a good buy in my opinion. Especially given the fact that other options cost significantly more.

One Jump from Rome Snowboards