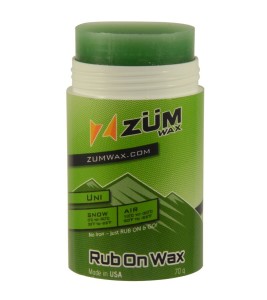 I’ve always been a fan of the classic wax and iron technique for getting a good coat on my board. While I’m not terribly picky about my wax, I do notice when I don’t have any. On a trip last season, I realized I wasn’t going to have a ton of time to sit there and wax my board on a workbench and needed something that was a little bit more portable. I found ZumWax Rub-On Wax and decided it give it a whirl. I’m a little skeptical about this kind of thing, but previous users had given me a little bit of hope that I would find some success in using this stuff for about a week or so.

CLICK HERE TO SEE WHAT OTHER USERS SAY ABOUT ZUMWAX

It’s pretty important that you still heat-wax your board when possible. ZumWax was designed to only last about half a day to a day at most, and if you go with repeated use a bit too often, you’ll find that it’s just not the same. But for its intensive purposes, it really does feel like a fresh coat of wax. The container it comes in fits neatly into one of the 8 million pockets you have in your snowboarding jacket, so it’s plenty easy to carry around with you.

I opted for the universal wax. The conditions at the time were mid-late winter, and warm temperatures hadn’t settled in yet. I’m not a racer, so I really didn’t have a need for the teflon stuff. One day I might opt for it though.

Given that I had waxed my board before the trip I rode for a good day without any issues. The next morning, I got to the top of the lift and decided to give this stuff a try. The wax tube is nice and thick, and it plays well while you’re wearing gloves. Rubbing it on was a snap. The cork top is actually used to spread the wax evenly over your snowboard. That’s actually a genius little design. Until now, I had never even heard of using cork to do on anything on my snowboard. The texture of the cork (small as it is) gets the excess off REALLY well. If you’ve got a bigger cork lying around, I’d recommend using it for making things a bit easier. If this thing was missing anything, I’d say a small brush would be helpful too, but I’m not mad.

Hopping back on the board after giving this thing a fresh coat, I was pleasantly surprised. My board had returned to the same condition it was in after my initial coat of wax…maybe even a bit faster (I wasn’t using any high-end wax to begin with). Rode some groomers and a few trees, and was able to put a little bit of speed on no problem. I actually got through the better part of the day before I felt like I should put more on. Now that thought may have been because I was consciously thinking about the wax and how my board was doing with the ZumWax. But I was plenty happy with how things were going.

I have heard that if you wanted a little more effect, you could iron on this wax as well, but given my situation, I didn’t get to give that a try.

70 grams is actually quite a bit of wax. And while it does rub off kind of quickly, it’s a rub on, so I kind of expected that. I may have to try the whole ZumWax Rub On Wax line as temperatures change up this season.